Powis castle located in Powys, Wales is famous around the world for its magnificent garden sheltering some of rarest plants in the world and its clipped yew trees.

As well as being known for its attractive formal gardens, the castle and its grounds comprise of scenic parkland and deer park, and peacocks! The terraces at Powis Castle are inspired by Italian and French styles.

A brief history of Powis Castle

Originally built around 1200 A.D, the castle was intended to be a medieval fortress on a rocky ridge overlooking the Severn Valley.

The castle has been remodelled and enhanced by Herberts and Clives family over the last 400 years. Powis Castle is now home to a vast collection of paintings, sculpture, furniture and an extensive collection of treasures from India in its Clive Museum. There are over 1000 items from India and East Asia at Powis castle dating as far back as 1600.

Robert Clive had a significant involvement in East India Company and its dominion over Indian sub continent beween 1744 and 1767. Robert Clive amassed a large fortune through his exploits in India, and he was one of the key players in establishing British Empire in India.

The “spoils of the wars” in India, on display at Powis castle today were amassed by two generations of the Clive family – Robert Clive and his son, Edward Clive.

For those who are familar with history of British Empire in India, they would recall the pivotal battle of Plassey, where Robert Clive overthrew Siraj ud-Daulah (1727 – 1757).

Siraj ud-Daulah was the Nawab of Bengal, betrayed by his own ally, Mir Jafar. Mir Jafar conspired against him with Clive, assuming full power under Clive’s blessing after Siraj ud-Daulah’s fall. Mir Jafar’s betrayal was so significant in the history of Bengal that his name has become synonymous to cunning and betrayal. Even to this day, in the Bengal region, the name”Mir Jafar” is believed to be used as a verb to describe cunning and crookedness.

A lavish palanquin is on display at Powis Castle as part of the Clive collection which was used by Siraj ud-Daulah. This was believed to have been abandoned in the battlefield after Siraj ud-Daulah was defeated, and was later brought to Britain. Robert Clive’s defeat of Siraj ud-Daulah and the plunder from Siraj’s treasure subsequently made Robert Clive one of the richest men in Britain.

Edward followed in his father’s footsteps and eventually became the governor of Madras. As Governor of Madras, Edward Clive played a key role in defeating another of the most formidable rulers of Indian sub continent – Tipu Sultan.

Defeat of Tipu Sultan and the Clive family’s ascension

Two of Tipu Sultan’s rockets captured after his defeat were displayed at the Royal Artillery Museum in London.

Tipu Sultan is often credited for advancing the economy through various economic development projects. He is credited for introducing some of the world’s highest real wages and living standards in the late 18th century.

His reputation and battle prowess resulted in Napoleon Bonaparte seeking his alliance to extend French influence to Indian sub-continent. It was believed that Napoleon wrote a letter to Tipu Sultan to join forces against the British. The letter was intercepted by British spies and never reached Tipu Sultan. This letter was believed to have played a key part in the decision to go into war against Tipu Sultan to prevent the French from gaining grounds in India.

Tipu Sultan was eventually defeated by a siege at Seringapatam Fort led by Lord Monington, with administrative assistance from Edward Clive.

It was noted that Tipu himself would not back off as the defeat was near when the British breached the walls using bamboo ladders. He lived up to his reputation and carried on firing muskets although the odds were severely against him.

He was eventually wounded and his servants had to carry him away on a palanquin. However, he was killed by an unidentified British soldier for his jewellery. His body was later found in a heap of corpses and was given an honourable burial in his family mausoleum in the city.

After Tipu Sultan was defeated, Edward Clive’s wife, Henrietta visited South India with a tremendous entourage consisting of 750 people, 66 infantry, cooks, 14 elephants, camels and bullocks. Henrietta and her two daughters’ journey to South India were meticulously recorded in a booked called “Birds of Passage” by Nancy K Shields. This book documents the letters Henrietta wrote to her brother, the Earl of Powis, and the journals kept by her daughter, Charlotte.

One of the letters sent by Henrietta to her brother summarises the extent of the plunders, Edward Clive stood to accumulate from the defeat of Tipu Sultan.

“The plunder of Seringapatam is immense. General Harris will get between £150,000 and £200,000. Two of the privates have got £10,000 in jewels and money. The riches are quite extraordinary. Lord Clive has got a very beautiful blunderbuss (a short, large bored gun) that was Tipu’s and much at Seringapatam. I should like to have the pickings of some of the boxes. There was a throne of gold, which I’m sorry to say they are breaking to pieces and selling by parts. Lord Mornington (Richard Wellesley, the Governor General) has presented me with one of the jeweled tygers (sic) from the throne.”

Letter from Lady Clive to her brother Earl of Powis

The gardens of Powis Castle spread over 26 acres is one of the most iconic Baroque gardens in Britain displaying ultimate perfection in landscaping.

The Yew trees that can be found nestled around the castle are some of the oldest and largest in Britain, trimmed to perfection and often providing umbrella like shelter with benches.

The elevated location of the castle building over the gardens and steps leading down the garden level resemble very much like a scene from a fairy tale.

Alongside watching deer roaming around freely in deerpark, one can find peacocks wandering around the lawns and gardens.

The walk in the Powis Castle Garden and grounds

You will come across some rare species of flowers on your walk in and around Powis Castle grounds and gardens.

There is also an interesting plunge pool at Powis Castle gardens which was built in 1770s. This plunge pool would have originally been filled with cold water and was built because Robert Clive had advised 1st Earl of Powis, Henry Arthur that cold baths in a plunge pool could be beneficial to his health.

It was widely believed that a plunge in the pool after some physical exercise could cure many ailments. The location of the plunge pool at Powis Castle amongst trees in the gardens also believed to have provided open air and view of natural landscape beneficial to a healthy mind. 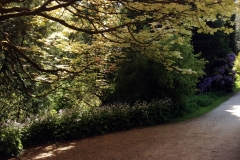 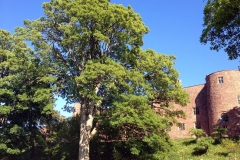 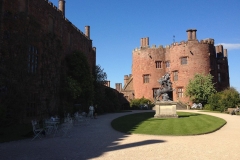 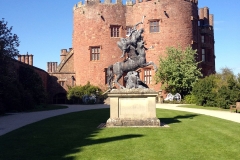 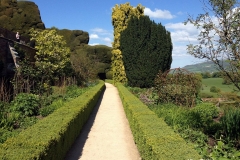 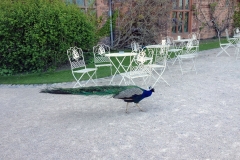 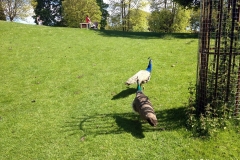 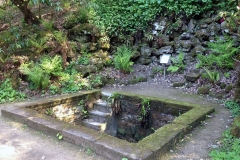 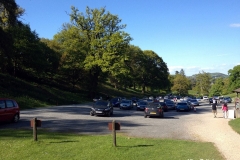 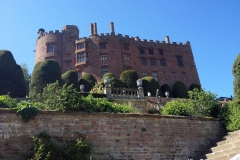 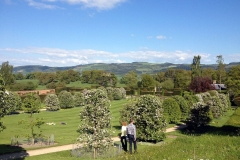 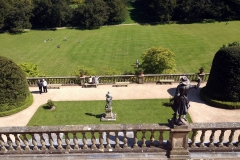 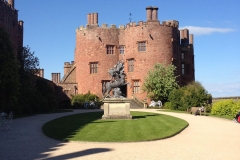 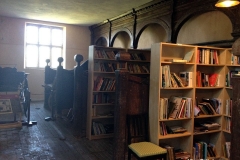 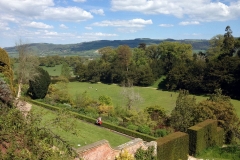 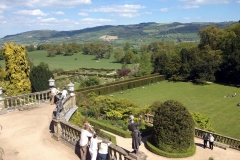 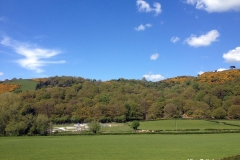 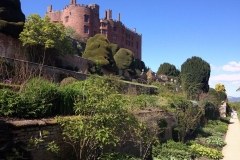 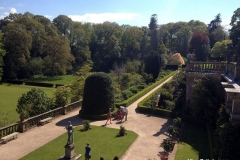 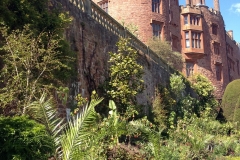 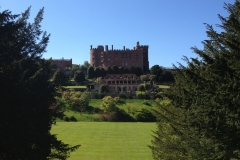 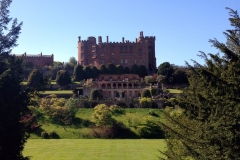 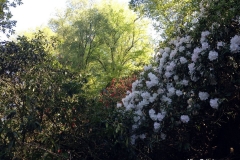